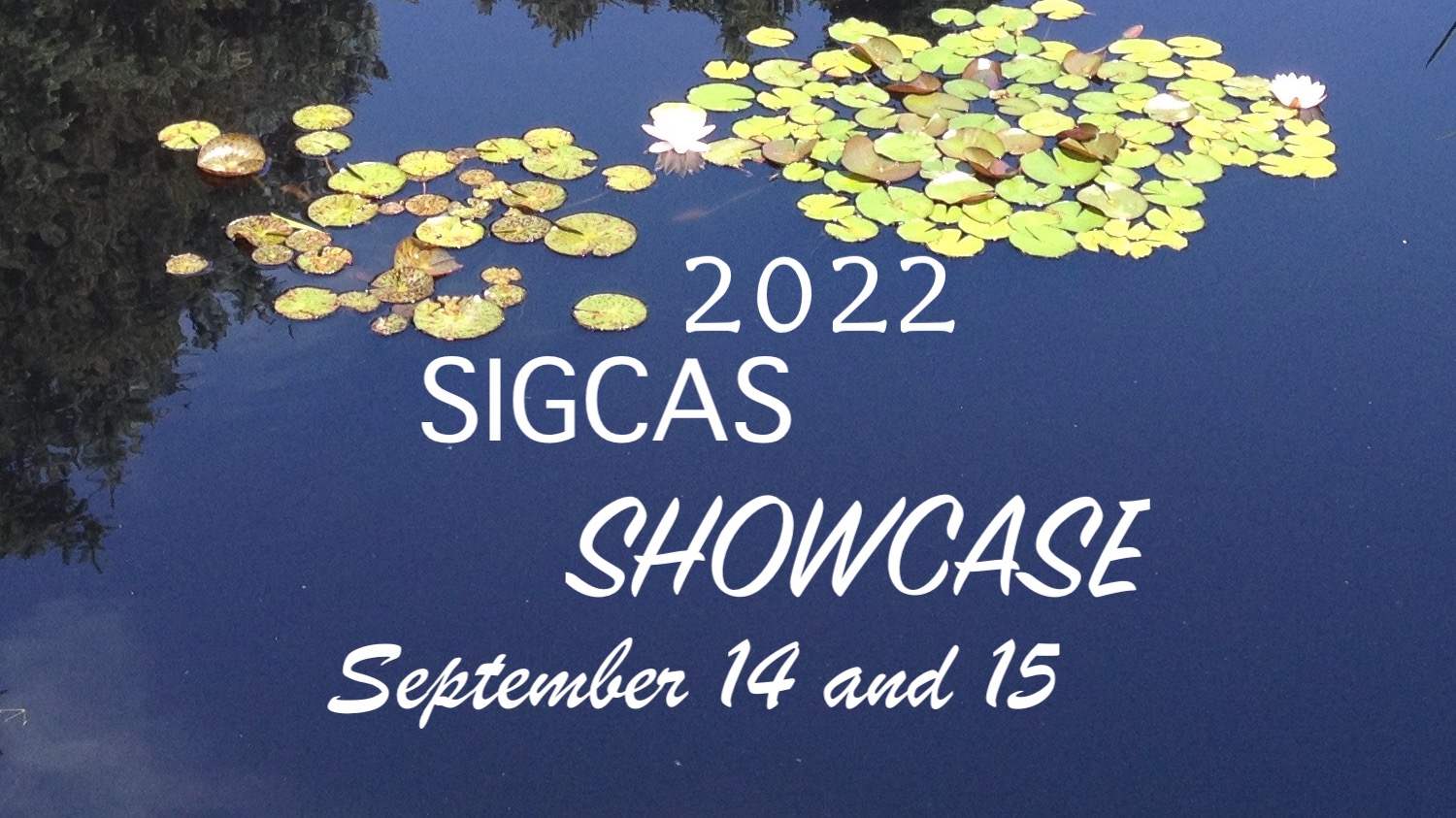 Although not required, we invite all attendees to join SIGCAS. Memberships are $25/year (US) for anybody, regardless of ACM membership (Students: $10 US). Join SICGAS.

The ACM special interest group on Computers and Society (SIGCAS) is pleased to announce its event showcasing SIGCAS, its activities and exemplars.

We invite you all to join us as we congratulate the 2022 SIGCAS award recipients, hear their insights and share in discussions concerning computers and their role in and impact on contemporary societal issues led by panels of experts.

See the schedule of events below and meet our award recipients.

Dr. Lisa Milenkovic is the STEM+Computer Science Curriculum Supervisor at Broward County Public Schools, the nation’s sixth largest district (http://browardschools.com/stem). Dr. Milenkovic is the lead for the District’s Code.org Regional Partnership for CS, the K-12 STEM Olympiad and robotics, environmental stewardship, and several other grant funded programs to engage students and teachers in STEM. She believes EVERY student should find their STEM identity through experiencing an ever changing, diverse set of fun and engaging opportunities (including gaming, spatial computing, and citizen science) that provide #STEMforALL.

In 2018, Flo Appel retired as a Professor of Computer Science after a 32-year academic career in Computer Science at Saint Xavier University in Chicago. During her tenure, her focus was on the development of pedagogy for computer ethics and its social impact. She was an active member of ACM SIGCAS, serving as chair for six years in the early 2000s. Upon her retirement, she recognized that she could make a significant contribution to her community by continuing to support higher education. In April 2021, she was elected to the Board of Trustees of the College of DuPage, her district’s community college.

(Dates and times in the following table are based Pacific Time in the US; see below for additional world-wide dates and times.)

Roba Abbas is a Senior Lecturer (Operations and Systems) and Academic Program Director with the Faculty of Business and Law at the University of Wollongong, Australia, and, more recently, a visiting Professor with the School for the Future of Innovation in Society at Arizona State University, USA. She is also a Co-Editor of the IEEE Transactions on Technology and Society; former Associate Editor of the IEEE Technology and Society Magazine; and the Technical Committee Chair of the IEEE Society on the Social Implications of Technology’s Socio-Technical Systems Committee. Roba primarily researches methodological approaches to complex socio-technical systems design.

Although Dr Abbas is not able to participate in the panel discussion, she is a co-developer of Professor Michael’s presentation.

Chris Coward is a Senior Principal Research Scientist and Affiliate Associate Professor at the University of Washington Information School where he also serves as director of the Technology & Social Change Group and co-founder of the Center for an Informed Public. Chris studies issues of information access, digital equity, information and digital literacy, misinformation, and civic engagement. As an applied researcher Chris employs participatory methods when engaging with communities. Many of Chris’s research projects are centered in public libraries, generating practical as well as academic outputs.

Anna De Liddo is Professor of Human-Computer Interaction and Director of Research at the Knowledge Media Institute of the Open University (UK). Her research focuses on the study of Collective Intelligence facilitated through new forms of Dialogue and Deliberation. She leads the Intelligent Deliberation Group (IDea: http://idea.kmi.open.ac.uk/) which investigates theories methods and tools accounting for the centrality of social interaction and discourse in public engagement, urban informatics, e-democracy and social innovation contexts. In the past 15 years Anna led the design and development of 8 different Collective Intelligence technologies (Cohere, The Evidence Hub, LiteMap, DebateHub, CIdashboard, Democratic Reflection, Democratic Replay, Bcause.app) which have been adopted by 17,000+ people worldwide. The significance of Anna’s research is seen in contexts such as health, higher education, public engagement and peacebuilding.

Kathi Fisler, Brown University
Panel: Research in Computing for the Social Good
Kathi Fisler is a Research Professor of Computer Science at Brown University. She is one of the faculty overseeing their department-wide effort in socially-responsible computing, which is now in its fourth year. Kathi has been bringing her combined research skills in computing education, formal methods, and software security to questions of how to effectively teach students to identify social-facing threats while designing software applications.

Esther is a PhD student in Computer Science at the University of Washington. Her research focuses on community networks in both rural remote and urban contexts, and especially how communities of practice can build and sustain technical infrastructures. She has installed community networks in the Philippines, Mexico, Tanzania, and around the US. She is currently a lead organizer for the Seattle Community Network, which seeks to build community-owned and maintained Internet access infrastructure for digital equity in Seattle and Tacoma. She serves as a Director at the Local Connectivity Lab, a 501(c)(3) nonprofit focusing on technology research, deployment, and teaching in support of community networks around the world.

Katina Michael is a Professor at Arizona State University, holding a joint appointment with the School for the Future of Innovation in Society and School of Computing and Augmented Intelligence. She is also the Director of the Society Policy Engineering Collective (SPEC). Katina was the chair of the IEEE 2089-2021 “Age Appropriate Digital Services for Children” standard and the inaugural chair of the Masters of Science in Public Interest Technology. She is also a senior global scientist in the Global Futures Laboratory and the Editor-in-Chief of the IEEE Transactions on Technology and Society. Katina’s presentation is based on work that she has done with Dr Roba Abbas (bio above)

Miranda Parker, San Diego State University
Panel: Research in Computing for the Social Good
Miranda Parker, Ph.D. is an Assistant Professor in Computer Science at San Diego State University. Her research area is Computer Science Education, where she focuses on issues of access to, assessment of, and achievement in computer science classrooms. Her work strives to create a data-driven perspective of the computing education landscape so as to design and promote low-cost and approachable interventions to level the playing field and allow equitable access and achievement in computing.

Neha Kumar is an associate professor at Georgia Tech, where she works at the intersection of human-centered computing and global development. She was trained in computer science, design, and ethnography at UC Berkeley and Stanford University. This training shapes her work, which engages participatory, assets-based approaches towards technology design with/for historically underserved communities. She currently serves as president of ACM SIGCHI.

Vesna Manojlovic, RIPE NCC
Panel: Sustainability and Green Internet
Vesna Manojlovic is a Community Builder at the RIPE NCC. Over her many years at the RIPE NCC, she has worked as a trainer, developing courses on a variety of topcis; led efforts to establish IPv6 RIPEness, and managed the Measurements Community Building team. More recently, she has focused on organising hackathons and increasing diversity. Vesna gives presentations and workshops at many technical conferences, and enjoys visiting hackerspaces. She received a B. Sc. in Computer Science and Informatics from the School of Electrical Engineering, University of Belgrade. She has three children.

George Porter, University of California, San Diego
Panel: Sustainability and Green Internet
George Porter is an Associate Professor in the Systems and Networking Group in the Department of Computer Science and Engineering at the University of California, San Diego. He is the Co-Director of the Center for Networked Systems, and a Co-Founder of inFocus Networks. George received a Google Focused Research Award, a NetApp Faculty Fellowship, and the NSF CAREER award. Previous to joining U.C. San Diego, he obtained a Ph.D. from the RAD Lab in the Electrical Engineering and Computer Sciences Department at U.C. Berkeley. Before that he was an undergraduate in the Department of Computer Sciences at U.T. Austin

Moshe Y. Vardi is a University Professor, and the George Distinguished Service Professor in Computational Engineering at Rice University. He is the author and co-author of over 700 papers, as well as two books. He is the recipient of several scientific awards, is a fellow of several societies and a member of several honorary academies. He holds eight honorary doctorates. He is a Senior Editor of Communications of the ACM, the premier publication in computing, focusing on societal impact of information technology.