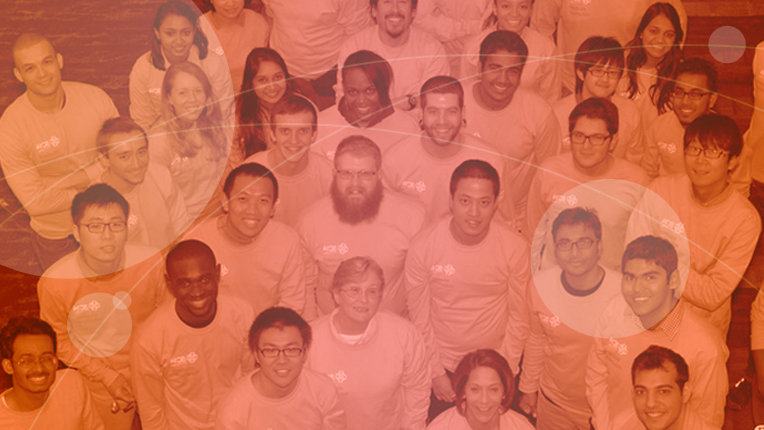 [Q1]: I noticed on your online biography that you first earned a bachelor’s degree in music.  I can relate, having earned a bachelor’s degree in history before moving in to the world of computing as a professional.  Looking back, what was it that first sparked your interest in computing, and do you think non-traditional paths people sometimes take on the road to a career in computing is significant?

[A]:  This is going to be fairly complicated.  For me, the path into computing was really, really nontraditional.  There are two parts to this.  My introduction into computing was pretty accidental.  I was in the Air Force, courtesy of the draft board.  It was 1967, and of course you remember at that time they needed bodies. My second Air Force assignment was in missile operations at Grand Forks, ND.  One of the things I became interested in was the training aspect, and we had a simulator, pretty much like an aircraft or pilot simulator to help train on all of the missile control equipment.  This thing was of course computer driven—a late 1960s model—an old UNIVAC shipboard machine that we were using, and it was not very cooperative. So I taught myself to program it in assembly language, actually in octal, believe it or not.  So that was what started the interest in computing. When I was transferred to Vandenberg AFB, UC Santa Barbara had a Master’s program in Computer Science so I decided I’d better learn something about what I’m doing.

The second part of my response is how did I get into computers and society having been an assembly language programmer?  The answer to that one is that after I retired from the Air Force, I knew I wanted to go into college teaching so I started a PhD in Information and Computer Science at UC Irvine. They had a program in social aspects of computing that was run by Rob Kling, who was my PhD advisor.  As a result of that, I became interested in SIGCAS and started doing some teaching at UCI.  Rob had some teaching materials I used and others were available through SIGCAS, most especially Don Gotterbarn’s and Rich Epstein’s work that was published in Computers and Society.

So yes, I’m convinced that breadth of interests and experience is significant, no matter what specific path someone wants to take.

[Q2]: What in your opinion, what are the most pressing issues in the computing field today?  Why?

[A]:   That question is a little easier for me because as you know, most of the work I do today focuses on making the Web accessible for people with disabilities.  I’m very much aware of other social issues that are hot topics today—social networking is certainly a rich area for analysis—but to me, my real focus is on the idea of making the web truly world wide and usable for everyone, including people with disabilities.  Today, the big thing is that the technology is here, we know how to do it.  The capabilities exist for someone like my colleague who is partially sighted from birth; he can do things that he never could do before.  The problem is, people don’t seem to know how to make web pages, well I should say very few people, know how to make web pages that are up to the standards that enable people to do that.  So there’s a huge education job, and that’s really what I do.

It’s not something that I’m working on alone, however.  I was very much involved in the Making a Difference Award that was given to Jim Thatcher, including presenting that to him at the AccessU conference a year ago.  Jim is one of our absolute pioneers in the accessibility area.  I’ve been very fortunate to have known and worked with him for a number of years and he’s been a very good friend and a real inspiration. There are quite a number of others also working in this area.

[A]:   I guess with anything in technology, the biggest challenge is just to keep up.  The technology is moving so quickly it outruns the standards, quite frankly.  Being part of W3C now, I’m painfully aware of how standards are built and how long it takes.  Trying to keep up is difficult.  People expect the top-notch, latest technology with all the bells and whistles—RSS, AJAX, etc.—and with my computer hat on, I love it. But with my accessibility hat on, I say ‘Hey guys, let’s not outrun the capability to make things usable for people that need it’.  It a tough balancing act, to roll out new technology and make it accessible.  Then of course the social networking issues are huge, and I can see all kinds of really interesting possibilities there.  Actually a couple of friends finally twisted my arm enough to have a Facebook page, which I look at about once a month.  I haven’t looked too extensively at some of those social networking tools for accessibility, but I do know many of them lack some of the basics.  If they were made accessible, that could be huge.  My students recently said they couldn’t understand how people had grown up in a world without Twitter, but even today, without accessibility, some people still don’t have access to tools that most in the population now take for granted.  It’s just a continuous job of trying to keep up.

[Q4]: What advice or words of encouragement would you give to up and coming scholars in computing?

[A]:   Since you are one of those up and coming scholars, I’ll say that I’m delighted to see you’re involved with SIGCAS.  I’d recommend that everyone re-read Rich Epstein’s ‘Forecast’ in the 30th Anniversary issue of Computers & Society.  It’s one of my favorite pieces of his.  Back then there were a group of us all talking, unsuccessfully, about how we could get new blood into SIGCAS.  It seems that Flo (Appel) has been doing a really good job of that.  For up and coming scholars, certainly if you’re researching in the social area, everything I said in my previous answer is relevant here.  When I see everything that’s going on in social networking, I see massive amounts of conference papers that could easily result from looking at any number of aspects of technologies like Twitter, Facebook, etc.  We could get all kinds of PhDs in Sociology and other disciplines out of that.  There’s no question about it, up and coming scholars will have to be interdisciplinary in their work.  I absolutely understand the problems of departmental parochialism and conference territorialism, but there’s no such thing as a stand-alone discipline anymore.  For example, I taught User Interface Design and Social Issues, and I got a chance at AccessU in Austin this year to participate in a track for usability specialists, many of them unfamiliar with accessibility.  It was a wonderful cross-talk with people from a diverse range of backgrounds and fields.  I gave a talk just this last week at HCI International where a whole panel of us in the area of accessibility spoke to an audience that was primarily user interface oriented.  So those are quick examples where as a scholar you need to be interdisciplinary in your work and your thinking.

[Q]:   Can you share with us a paper or article by someone else you think is important?  Do you have an upcoming paper or publication our readers should be looking for?

[A]:   There’s not anything current that’s specifically on my mind, but as I mentioned previously, a re-reading of Epstein’s ‘Silicon Valley Sentinal-Observer’ columns in C&S would be worthwhile.  The thing is, everything he said came true because he wasn’t really talking about the future.

As far as my own writing, my talk at HCI International is in the proceedings.  It deals with the evolution of an accessibility testing protocol—mostly an update of my article in C&S last year.  Another one I did recently was at the International Conference on Technology and Disabilities in March.  That paper was with Wayne Dick dealing with Section 508 and WCAG2—pretty specialized stuff.

[A]:   For one thing, I’d certainly like to congratulate SIGCAS at this point.  The fact that it’s still going is pretty impressive.  There was a time in the past when I thought we were pretty much dead, when we ran into financial problems several years ago.  But we navigated through that, and I think most importantly, through the following election we were able to get some new folks in leadership, which has been huge.  Those who have helped the group continue, and continue as strongly as it has, are to be commended.

The other thing would be to reiterate the push for interdisciplinary thinking—of course Computers and Society is interdisciplinary by nature.  There are so many opportunities in looking at the ways we are accommodating, or not accommodating, people that need accessibility.  There are many who could very much benefit from information technology resources, but often people just don’t consider that.  My biggest thrust today is to encourage people to design well in the first place and everyone will benefit.  It’s like building ramps into a building—you put them in and everybody uses them; they’re not just for wheelchairs.  Information systems design should be the same way.